As a software developer I love working in the terminal where I do most of my work.

iTerm2, zsh, vim, tmux became my favorite tools but there are many others I use pretty much on a daily basis.

Let’s take a look at some of them.

This one you probably already know. Homebrew is a fantastic package manager for macOS and Linux with an active community of developers on Github.

You can install nearly any software using Homebrew. Every command-line tool described in this blog post below can be installed as easy as running

To search for particular software run:

To install Homebrew itself from the command-line run:

tldr pages is a collection of simplified man pages. It’s great when you need to recall how to use a certain command or tool but don’t want to search through a man page or documentation. 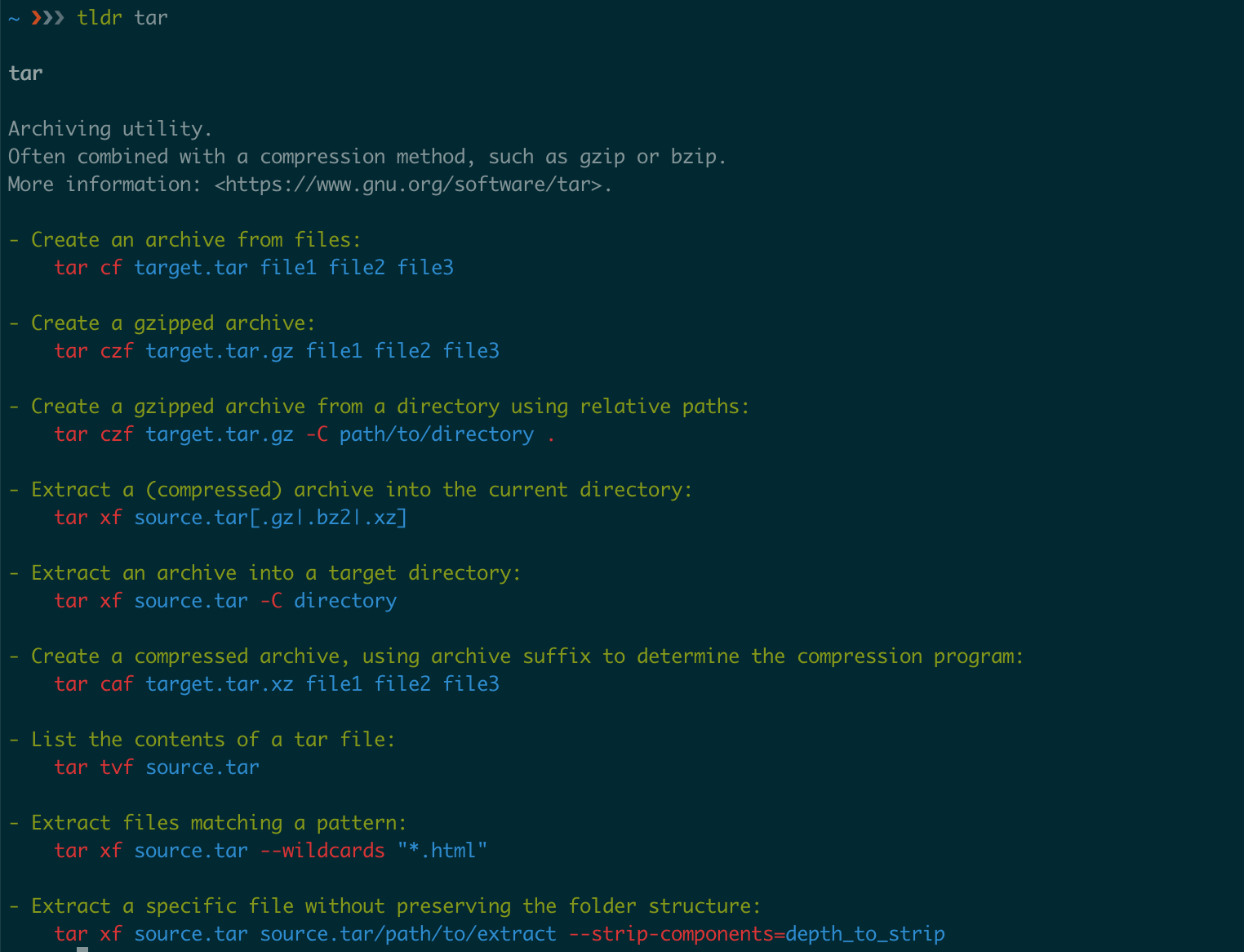 ag also known as The Silver Searcher is a tool for searching code.

I’ve been using ack for years but recently switched to ag as it works much faster (34 times in some tests).

For instance, use it to list files in the current directory that contain the printf function:

Install it with Homebrew as:

tig is an ncurses-based text-mode interface for git.

It works mainly as a Git repository browser, but can also assist in staging changes for commit at chunk level and act as a pager for output from various Git commands.

tig is super fast and it’s easy to navigate around. 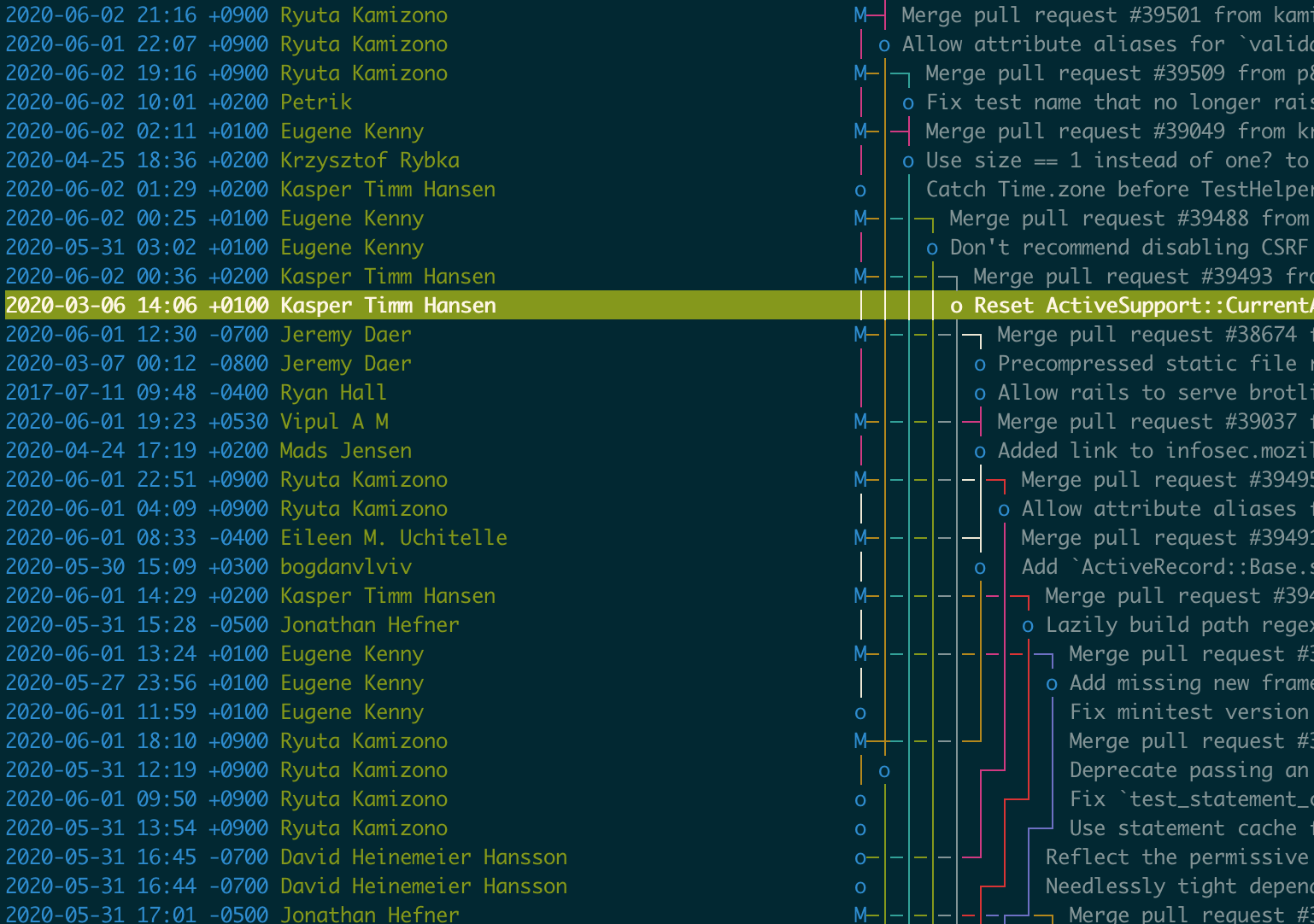 tree is a great little tool that prints content of directories in a tree like structure format. I like to use it to get a quick overview of an unfamiliar project, for example, when I clone a new repository from Github.

To illustrate its output we can print only directories up to 3 levels of depth: 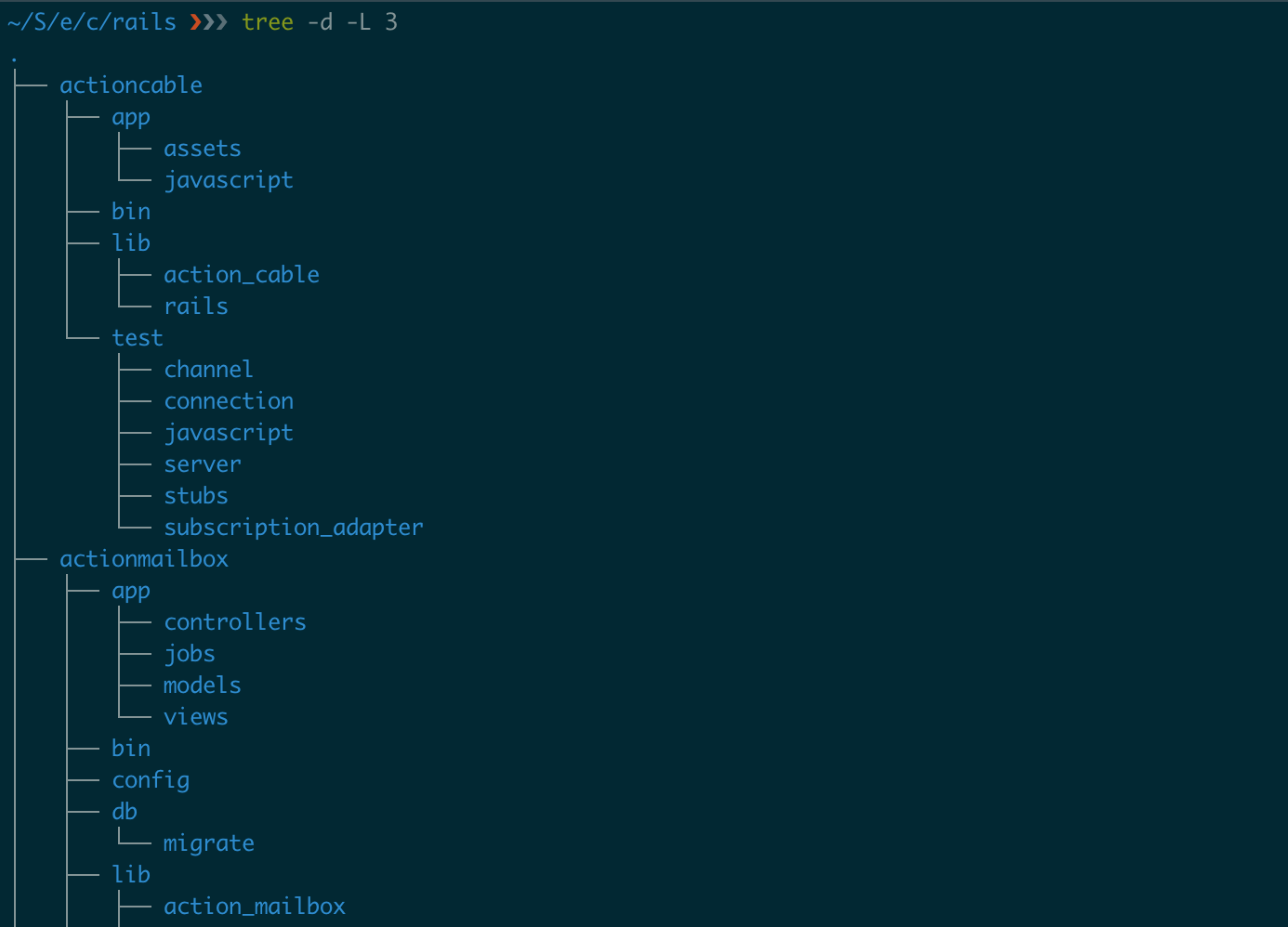 curl is a command-line HTTP client. It’s oldie but goodie. There are some modern alternatives with colorful output and which are probably more user friendly (see the list below). I have them installed on my machine but always forget to use in favor to curl.

A few curl commands I frequently use:

Follow redirects and display response headers of a particular site:

jq is a lightweight and flexible command-line JSON processor.

It’s like sed for JSON data - you can use it to slice and filter and map and transform structured data with the same ease that sed, awk, grep and friends let you play with text.

And it plays nicely with curl.

GitHub has a JSON API, we can get the latest commit from the Ruby on Rails repository and feed it to jq: 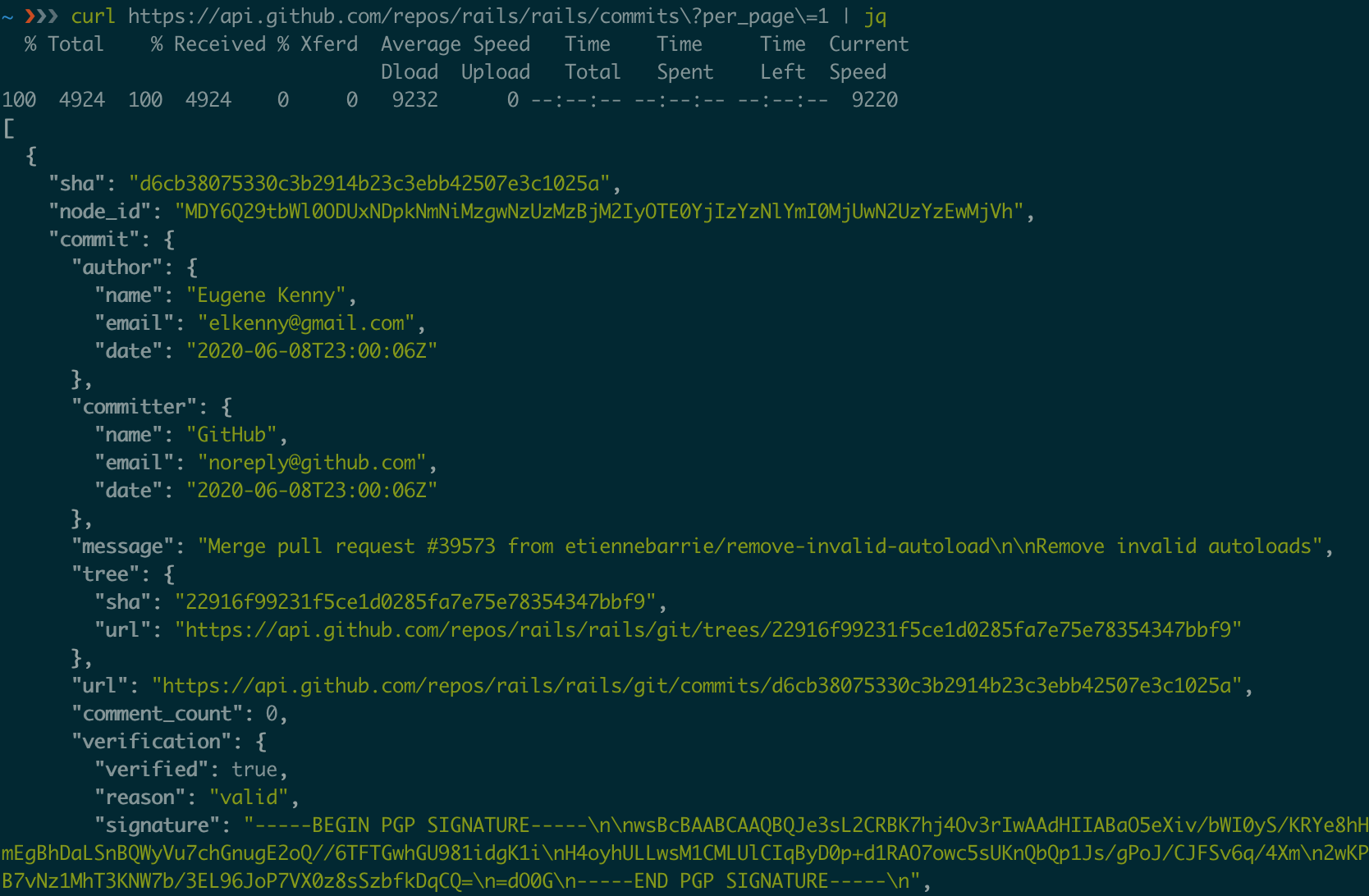 With jq we can easily extract the message from the commit:

glances is a system monitoring tool. You can think of it as top (htop) on steroids.

It gives a large amount of monitoring information about your system:

You can install additional plugins to monitor a bunch of other things.

Here is how it looks: 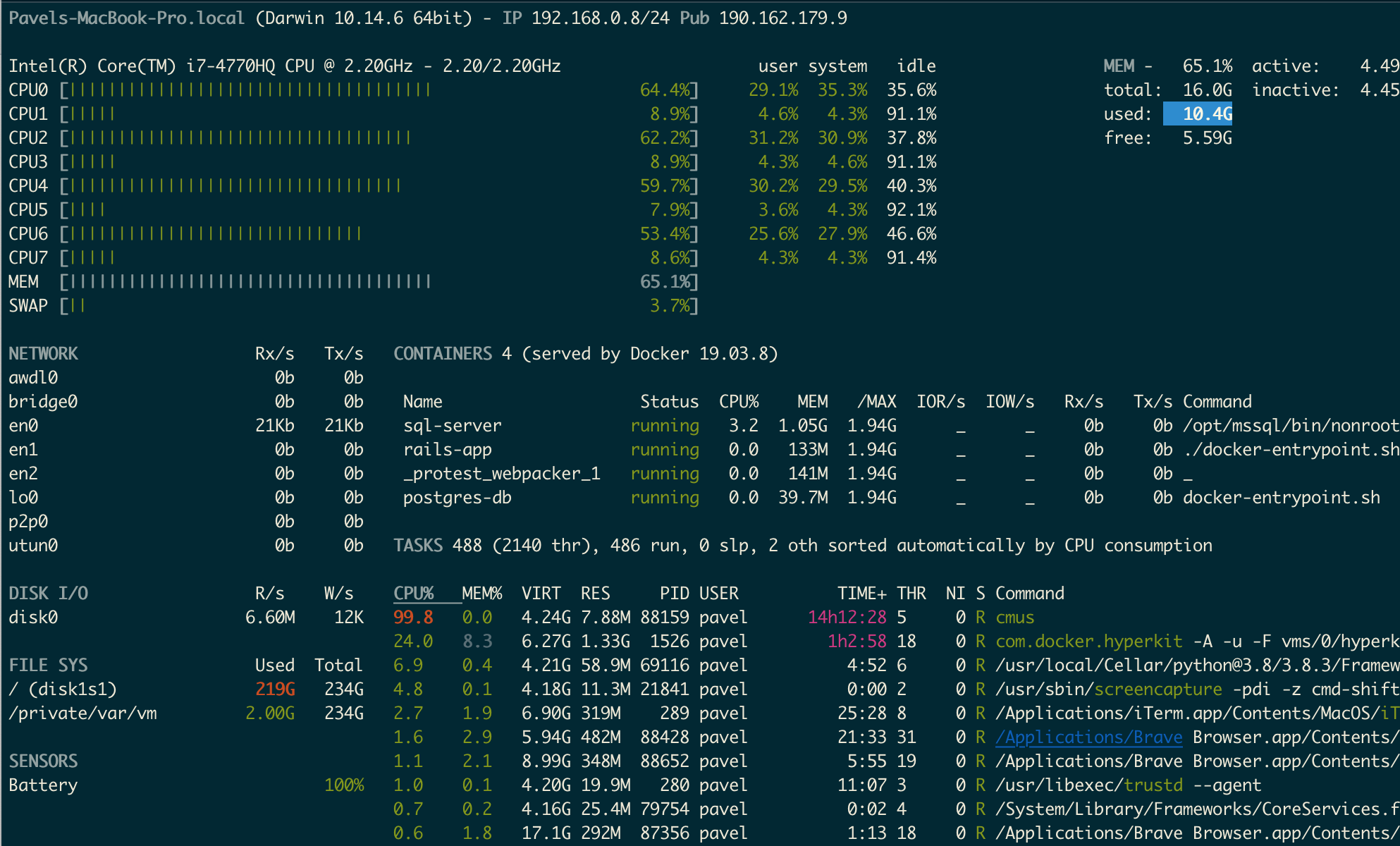 You can set up monitoring for specific processes. For instance, to monitor Ruby applications create ~/glances.ini with the following content:

wrk is a handy HTTP benchmarking tool. It’s like ApacheBench (ab) but a modern version.

It’s capable of generating significant load when run on a single multi-core CPU.

For example, we can run a benchmark for 60 seconds, using 8 thread, and keeping 400 HTTP connections open against a simple HTTP server implemented in Go:

A typical scenario for me is to download videos when we plan a long trip where we might have no Internet connection and to put them on iPad via iTunes. This works great as I don’t really watch movies on a plane but YouTube has plenty of screencasts and educational materials.

Another case is when I go for a run and want to listen to a YouTube video. It turns out the visual part doesn’t play a huge role and you can simply listen to many videos.

youtube-dl can work with YouTube urls but I find it easier to supply it with video ids. This is the part that goes after ?v=. For example: grnQ46lNDAc in the following video: https://www.youtube.com/watch?v=grnQ46lNDAc

Download a video, extract audio and save it in the mp3 format:

Download a video, extract audio and save it in the mp3 format with meta data:

I could never get used to iTunes on Mac or any other Desktop music player but cmus does a great job for me – it’s light, has a clean interface, vim key bindings, with many options and supports multiple music formats. 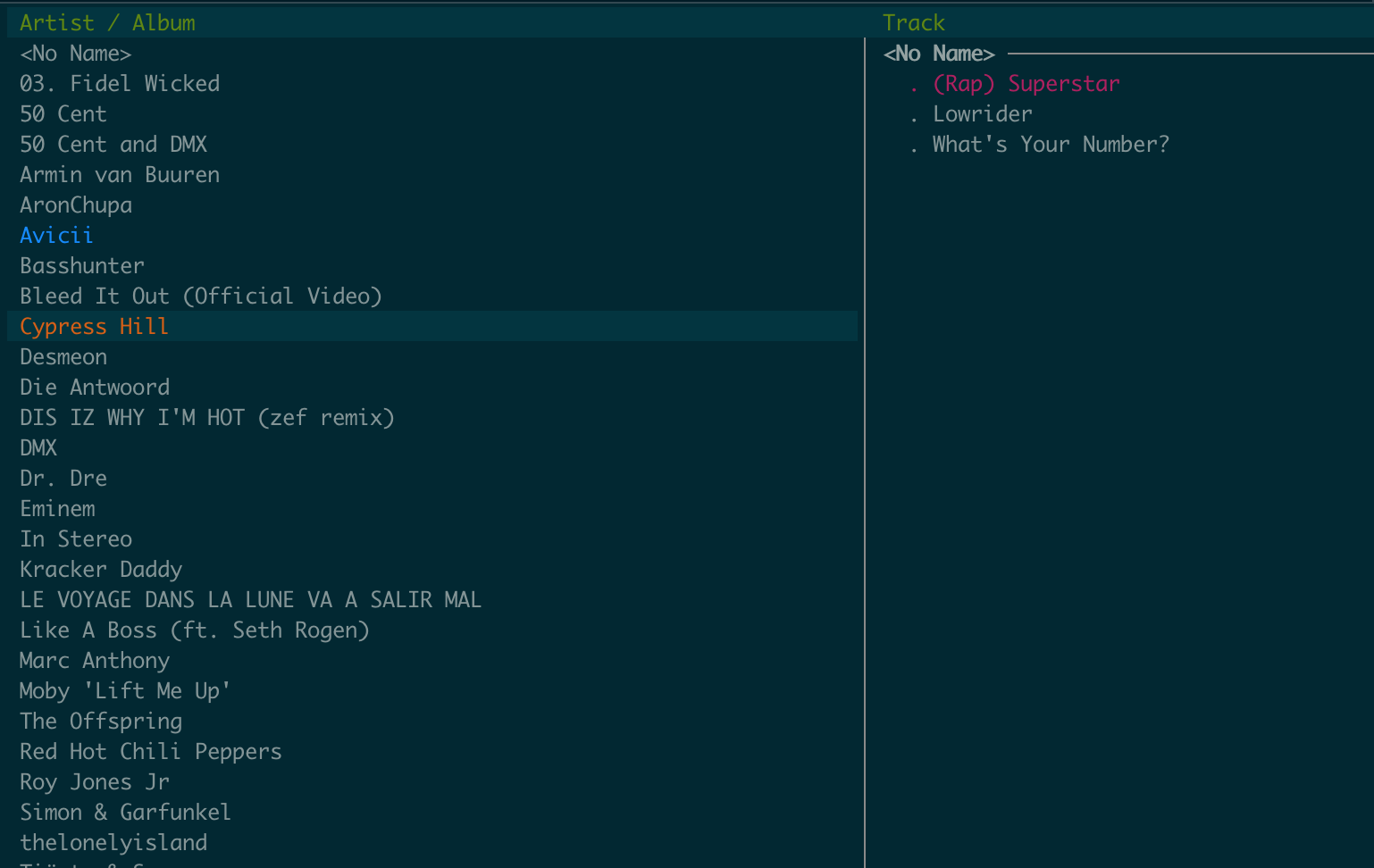 To start using it go to the folder with your music files and type cmus Then :add . to add music form the current directory.

As mentioned above you can use vim key bindings to navigate around.

To change a color scheme you can use :colorscheme (solarized-light, anyone?)

Well, that’s all for today.

There is a bunch of other great command-line tools. What are yours? I would love to hear from you!